Warm, ionized hydrogen in sharp contrast to cold, dark clouds of hydrogen and dust makes this area of the autumn sky the most dramatic we can see from Norway's latitudes. William Herschel documented the nebula in 1786. As early as 1890, the German astrophotographer Max Wolf described the shape of the nebulosity as resembling North America, with outlines reminiscent of Mexico, Yucatán, Florida and the Caribbean.

To show how large an area of sky this photo covers, the circle has the same angular diameter as the moon on the sky, 1/2 degree or half the width of your little finger at arm's length. The rectangle marks the area of the photo below of a large Herbig-Haro object, the birth of a star.

Exposure: 64 frames i H-alfa in groups of four panes, 120 min in total for each pane

The location of the  North America and Pelican Nebula

Map of the Milky Way galaxy. The North America and Pelican Nebulae are marked by the light-green square, NGC 7000. The orange dot marks our solar system which lies 2590 light years from NGC 7000, in the same arm of the Milky Way, - the Orion Spur. This section of the map is 50 000 light years on each side.

The pink blobs are star-forming nebulae. New-born stars ionize the nebulae with UV-radiation, and since nebulae are 75% hydrogen, the nebulae glows pink or red.

Deep inside the Pelican Nebula

The Pelican Nebula in Cygnus is near the zenith during autumn evenings in southern Norway. Stars are born from collapsing clouds of cold (-250 C) hydrogen. During the span of several thousand years, the young star expels gas jets along its rotation axis. The jets reach velocities of several hundred kilometers per second. These new-born stars are called Herbig-Haro objects. They are named after George Herbig og Guillermo Haro, who described the physics of them in the 1950s.

Dinium Observatory is a private backyard observatory on Rennesøy (Isle of Rennes) in south-west Norway. It was built by R.W. Williams, an amateur astronomer and professional paleontologist.

The fiberglass dome is produced by ScopeDome in Poland. The observatory's floorspace is only 8 sqm, yet the dome houses a 62 cm (24 in) cassegrain telescope. The telescope and German equatorial Mount have a total mass of 700 kg.

The equatorial mount and truss tube is produced by Astrosysteme Austria (ASA) near Freistadt. The optics are ground and figured on a spindel machine. The truss tube allows the optics to be configured as an f/10.4, 6450 mm cassegrain or a f/3.4, 2108 mm prime focus astrograph. Both foci have large flat-field correctors that yield a 50 mm diameter photographic field. 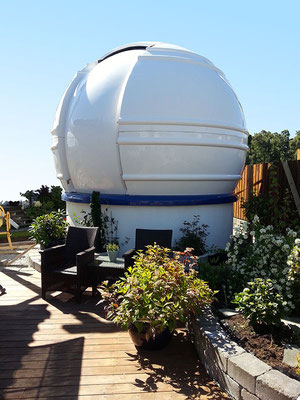 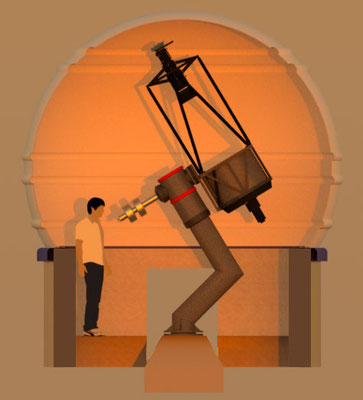 Left: Although this is Norway's largest optical telescope, the observatory's footprint is small.

Right: Cross-section showing the pyramid-shaped, mechanically isolated concrete pad which is cast and anchored on granitic basement rock. The German-type equatorial mount (560 kg incl. counterweight) is fastened to the concrete pad with expansion bolts. The total mass of the telescope and mount is 700 kg.

Interference from clouds reduced the number of sub-exposures for ionized sulphur (SII) and oxygen (OIII).

How does one grind, polish and figure telescope optics at home?

The fixed-post polishing tool quickly polished the surface to s sphere, reaching the target center of curvature. The polishing compound was cerium dioxide.

The pitch lap is cast as individual squares on the cement tool. Although this method is very time consuming, it avoids the risk of thermal shock to the cellular mirror blank.

We humans have sent many tonnes of technology into orbit from 1957 to the present, - more than 5000 satellites.

During a 4.4 hour exposure covering 6.25 square degrees of sky, many old and new satellites cross the field.

This is  mosaic of seventeen lunar images, each of which consists of more than one hundred images stacked and processed in  AviStack2. Composited digital resolution is 5200 x 6500 pixels.